Orlando Repertory Theatre is well-known for the plays and musicals it produces for family audiences, from weekend public performances to weekday field trips. Did you know that there are also opportunities for backstage tours, pre-show workshops, and other ways to deepen and enrich your experience with each show?

On November 2nd, a group from Orlando United Rescue Mission (OURM) attended a performance of How I Became a Pirate as a part of a long-standing partnership with Orlando REP and ArtWorks Orlando. The mission of ArtWorks is to “inspire hope and promote healing in children who have faced the challenges of poverty, homelessness, or abuse. Through community exhibits, ArtWorks provides a personal connection between these often isolated children and the general public, giving the children a much needed presence and voice.” OURM is a homeless service provider that has partnered with Orlando REP for a number of years; similarly, ArtWorks and Orlando REP have a rich history of collaborations including our Young Artists in the Spotlight program, after-school residencies, and workshops held at the theatre. Our similar missions and goals led to a natural synthesis for an exciting day of drama, visual art, and live theatre!

As a new Teaching Artist at Orlando REP and graduate student in the UCF Theatre for Young Audiences MFA program, I was thrilled to be a part of this special workshop which included a private tour and theatre workshop. I met our group of kids in Orlando REP’s lobby two hours before the show was set to begin. I noticed a group out front through the glass doors – eleven kids bouncing in excitement. They had all been to Orlando REP before as part of the partnership with OURM, but only one child knew the story of How I Became a Pirate. In addition to seeing the play, we wanted to give these kids the opportunity to understand how all of the pieces of a play come together to tell a story.

We set out through the building, with singing from the Youth Academy Lion King Jr cast underscoring our tour.  The layout of the building winds and twists to accommodate the Universal Foundation Theatre, Bush Theatre, and Black Box, so that our design and production teams can easily access all three.

We began in the costume shop where we saw renderings (design drawings) of the costumes and played a game to guess what kind of character wore each costume.

We made our way back to the lobby, and there I showed them the greatest object in the world – a plastic cone! Well, not an ordinary cone, a cone that could be anything they wanted it to be. In theatre, we often have to think creatively to come up with solutions. If we don’t have a real typewriter, for instance, can we make it out of: Foam? Cardboard? Our own bodies? Each group member took that cone and transformed it using their bodies and imaginations into a prop they thought they might see on the pirate ship. We saw telescopes, and swords, and compasses, and parrots! To conclude our workshop, we played a game called Ships and Sailors, just to make sure we were up to date on pirate lingo. 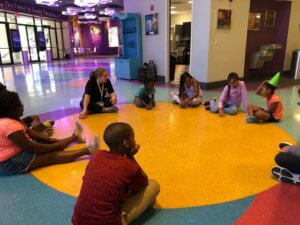 In the time remaining before showtime, the group had lunch and visited the Orlando Museum of Art! Renee Schneider, Director of ArtWorks, guided them in a fantastic tour and workshop exploring pirates and visual arts.  “The students learned about artist Stephen Althouse and searched the walls for art treasures at the Orlando Museum of Art. Next, they added skull and crossbones to pirate hats and jewels to golden treasure chests. Each treasure chest had a mirror inside. When the children saw their reflection, they were reminded that they are the most valuable treasure of all!”

All of these experiences in the tour and workshop aim to give context to the theatre going experience. These students walked in to the theatre not only more excited to see the production and how all the sneak peaks they witnessed come alive on stage, but with a mindset of energy and creativity. The more you can immerse yourself in the theatre going experience, the more fun you have and the more you may understand the plot, character’s choices, and style of the production.

How I Became a Pirate is the first of several shows and workshops the OURM kids will participate in at Orlando REP this season. We are excited for the opportunities for enriching the lives of these young people!

If you are interested in pre- or post- show tours or workshops, or know of a community group like OURM that has an interest in this kind of a theatrical experience, contact [email protected].