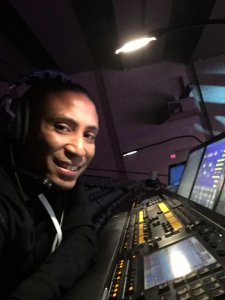 My design specialty is entertainment lighting. I have always been fascinated with electricity and lights as a child. I did not know until college that being a lighting designer allows me the best of both worlds!

I learned everything I know about this field from college where I started in film and then found my way to theater.

What is great about this show is that as a lighting designer, I get to have fun creatively with such varied scenarios as aliens, ghosts, zombies, and robots!

Doing lighting, I have spent many, many long nights alone in different theatres programming. Sometimes I hear noises at night and it always spooks me since I know I am by myself. If there are ghosts, I am sure they had fun messing with me while I program! 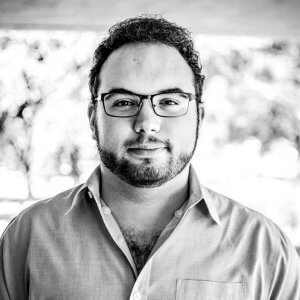 My specialty is Sound Design/Music Composition. I started learning about sound while in middle school. I was involved with theatre and music theory classes and was asked to run the soundboard for a production of The King and I. After that, I spent the majority of my time in high school developing my skills to become a sound engineer. While in college at UCF, I began studying design more and eventually decided that it was a better fit for me. To me, sound design is the perfect harmony of art, music, and technology. I love shaping sonic landscapes onstage and shifting peoples’ emotions through non-visual mediums.

I went to UCF and earned a Bachelor of Fine Arts in Theatre Design and Technology.

Writing the music for Camp Omigosh has been a blast. The show’s musical style is written to reflect various cartoons over the years. There’s a bit of Scooby-Doo, there’s some Fairly Odd-Parents, and even a little Jimmy Neutron. A classic camp sound with a sci-fi twist is the best way to describe it. We also look towards the cinematic scores of John Williams as inspiration to bring life to the action sequences.

Johnny Rep always comes knocking if you are ever alone at Orlando REP. There’s been many a time where he’s seemed to cause some technical glitches with our sound system. 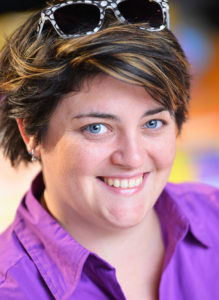 For Orlando REP, I design props and puppets primarily. I am also a director and sound designer, and have previously been a stage manager and technician. I decided to become a designer for theatre because I love storytelling and theatre’s unique ability to combine visual art, literature, and music. Theatre allows us to connect with our audience in a way that film and TV and the internet can’t accomplish: with personal, live exchange of energy.

I attended college at UNCGreensboro and earned my Bachelor’s degree in Theatre, and later I went to graduate school in UCF’s Master of Fine Arts program in Theatre for Young Audiences. I took classes in stagecraft, puppetry, and design that prepared me well for my role as the head of the REP’s props department.

After being away from live theatre for a large portion of 2020 due to the pandemic, my favorite part of designing Camp Omigosh has been collaborating with our director and other designers on the team. This show has a lot of imaginative moments in it that present some creative challenges, so it’s always fun to work together to figure out how those moments will work and to bring them to life.

I never really believed in theatre ghosts too much until this past April when I was mixing the sound for a show at the Athens Theatre in Deland. They have always said that the building was very haunted, but in the 5-6 years I’ve been doing shows there, I’d never had any encounters. But one night, I inadvertently looked up into the attic space above the sound console before the show and got a really spooky feeling. Then at several points during the show, it felt like someone was standing right behind me- I felt something graze my shoulder, but when I turned to look, nobody was there. Then I thought I heard someone pass through from the other side of the booth, but when I looked, there was nobody. When I asked the stage manager if he’d seen or heard anything, he said it was probably the ghost and that they’d had paranormal investigators come to the building in the past who had definitely detected some paranormal activity. I was totally creeped out!

Do you like ghost stories? Why or why not?

I love a good ghost story! I love the anticipation and the tension that ghost stories make people feel. I’ve been a fan of scary movies and creepy stories for many years… I didn’t like them much when I was a kid- because they would keep me up all night and make me afraid, but as I got older, I really came to like the way ghost stories tap into the unknown!

Get your tickets to this spooky sci-fi adventure here!